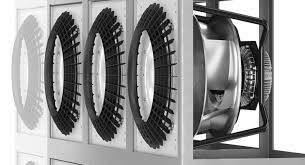 HVAC fans and blowers are used to move air through heating, ventilating, and air conditioning (HVAC) systems. They are an integral part of the air handling systems that bring or draw fresh air into buildings. HVAC fans and blowers can be mounted to an exterior wall (ventilation unit) or above the ceiling (plenum fan), or used as part of a ducted system (duct fan). The fan spins or the blower turns by means of an electric motor, thus creating unidirectional air flow. Often, the air is pre-heated or cooled. Types of HVAC fans and blowers include:

Air flow rate is the rate at which air moves within or between HVAC zones.

Static pressure is the pressure at which an equal amount of air is supplied to and exhausted from a space.

Media temperature is expressed as a range.

The diameter of the fan, or the diameter or maximum dimension of the blower outlet is also an important specification to consider when selecting HVAC fans and blowers.

There are two drive options: direct drive and belt drive.